PostgreSQL: Partitioning/Sharding and Foreign Data Wrapper Step up and Configuration

Following snippet of PostgreSQL documentation, https://www.postgresql.org/docs/12/ddl-partitioning.html#DDL-PARTITIONING-OVERVIEW, explains the benefits of partitioning as fallows.

Partitioning refers to splitting what is logically one large table into smaller physical pieces. Partitioning can provide several benefits:

These benefits will normally be worthwhile only when a table would otherwise be very large. The exact point at which a table will benefit from partitioning depends on the application, although a rule of thumb is that the size of the table should exceed the physical memory of the database server.

PostgreSQL offers built-in support for the following forms of partitioning:

The table is partitioned into “ranges” defined by a key column or set of columns, with no overlap between the ranges of values assigned to different partitions. For example, one might partition by date ranges, or by ranges of identifiers for particular business objects. Each range's bounds are understood as being inclusive at the lower end and exclusive at the upper end. For example, if one partition's range is from 1 to 10, and the next one's range is from 10 to 20, then value 10 belongs to the second partition not the first.

The table is partitioned by explicitly listing which key value(s) appear in each partition.

If your application needs to use other forms of partitioning not listed above, alternative methods such as inheritance and UNION ALL views can be used instead. Such methods offer flexibility but do not have some of the performance benefits of built-in declarative partitioning.

Sharding is not partitioning. As explained by the following MongoDB documentation - https://www.mongodb.com/features/database-sharding-explained#:~:text=Sharding%20is%20a%20method%20for,storage%20capacity%20of%20the%20system

"Sharding is a method for distributing a single dataset across multiple databases, which can then be stored on multiple machines. This allows for larger datasets to be split into smaller chunks and stored in multiple data nodes, increasing the total storage capacity of the system."

However, PostgreSQL has implemented sharding on top of partitioning by allowing any given partition of a partitioned table to be hosted by a remote server. The basis for this is in PostgreSQL’s Foreign Data Wrapper (FDW) support, https://wiki.postgresql.org/wiki/Foreign_data_wrappers, which has been a part of the core of PostgreSQL for a long time.

This document will go into required set up, steps to enable sharding in PostgreSQL/RDS for a given table and using a simple Spring Boot application to connect database and tables. 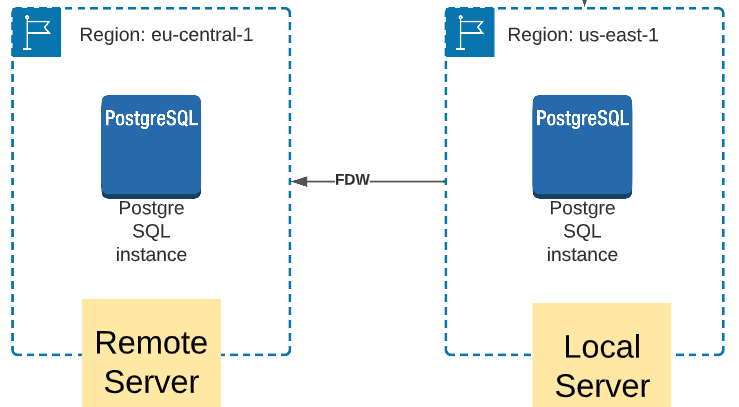 Note: This article does not go into how to spin RDS instances in AWS or how to allow networking / security for them to communicate with each other which is needed. Both of these databases can be in the same Region. To make it transparent, in this set up, I used a different region all together.

I used the following table set up to test the set up.

No specific configuration is required at AWS RDS level as the most recent versions of PostgreSQL already come with postgres_fdw installed. We will just need to be enabling it.
On the local server the preparatory steps involve loading the postgres_fdw extension, allowing our local application user to use that extension, creating an entry to access the remote server, and finally mapping that user with a user in the remote server (fdw_user) that has local access to the table we’ll use as a remote partition.

Spring Boot Application can be used to easily configure a Datasource connection.
With this application, you can just connect to the local database and interact with the TABLE_A table as if REMOTE server didn't exist at all.

SELECT * from TABLE_A - PostgreSQL will use remote server settings through postgres_fdw extension and load data from both partitions - "eu" vs "usa".

See How We are Connected!